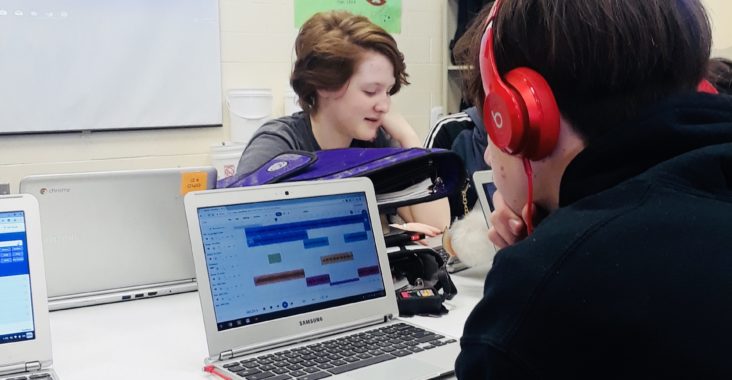 I have taught music for 10 years. I’ve taught my classes based on precedent and what was needed to fill in gaps in the schedule. I’ve taught general music, choir, show choir, guitar, advanced guitar, musical theatre, history of Rock and Roll, Music history 1400 to 1900, ukulele, beginning band and advanced band. So, it goes without saying, at this point I have a lesson plan for pretty much every class and every contingency. Or so I thought.
Last year, in an attempt to align the two middle schools in my current district, I took on teaching composition. Composition. How does a person teach composition in middle school? You must understand a certain amount of music theory to truly ‘compose’, but how do you teach mastery without overreaching and making it boring and academic? Truthfully, as a college student I thought composition class was quite boring. How in the world was I going to get a 12 or 13 year-old engaged with composition?

I started with a Sibelius style composition program where the students input each note and rhythm individually. They went measure by measure until finished. This is adequate but it is not terribly engaging. I found, rather quickly, that I had many students who were not completing assignments because it was tedious and horrible for them. Toward the end of the quarter the students were hungry for something else, something better. That is when I heard about Soundtrap.

Soundtrap was recommended to me by a fellow music educator as an engaging program that was sure to win over the toughest of middle school audiences. I decided to block out the last two weeks of my lesson plans and dedicate them to introducing the kids to Soundtrap. At that time I didn’t have a clear picture of the depth of possibility with the program. I proceeded to give the kids some fairly generic instructions and turned them loose. Turns out, I received some WONDERFUL work from the kids who were struggling before. It wasn’t that they weren’t musical or didn’t understand the Sibelius style of composition…it just wasn’t for them. Soundtrap was what they had been waiting for for 6 weeks.

Fast forward to this year, I started off with the manual input style composition but quickly transitioned them to using Soundtrap. They were so excited and motivated to compose knowing they would be able to ‘Trap’ it out later! One of my favorite student quotes: “Soundtrap is so much fun! I’m going to ask my parents for my own subscription when this one runs out!” Music to my ears! I have also overheard, “Soundtrap makes this class so fun. I’ve never said this about any class but when class starts I never want it to stop. I wish I could do this all day.”
One of the assignments offered on the Soundtrap website is a ringtone project. A student of mine came up with such a creative one that no fewer than three phones now ring this tone, including mine!  Currently we are creating projects focusing on form. The assignment is to create an ABA song (or a song in Ternary form). They are having so much fun creating their song.

Soundtrap has changed everything for me. I love the way it captures the innate musicality of the students and gives them a way to express themselves without all of the ‘technicality’ of writing songs by hand. There will always be a place for handwritten compositions but Soundtrap offers and alternative (perhaps superior?) avenue of capturing our creative learners amazing musical thoughts!

About the author: Sara (Libby) is in her 10th year of teaching Middle School music. She taught for 7 years in Bullhead City Arizona (Fox Creek Jr. High) and currently teaches in Grain Valley Missouri (Grain Valley South Middle School). Mrs. Andreas has an Associates in Science from Cottey College, a Bachelors of Fine Arts and a Masters in Education, Emphasis in Music from Truman State University. She also has a background in choreography, specializing in show choir, stage performance and pit orchestra conducting.

Collaboration: From the Netherlands to the US