Find the most experienced person in your interests and become their friend. If music is your interest, then you need to befriend Erick Quintanilla. Or even better, have him as your teacher, which is the case for the lucky music students at Roosevelt High School in the Los Angeles Unified School District (Musical Production Academy LAUSD).

Music has defined Quintanilla’s life since a young age. Still, it’s been the relationships and mentorships that he has formed over the years that have not only defined him as a musician but have given him the wisdom and ability to inspire, shape, and guide young students, from being a teacher to reviving an aging music program, to currently working to establish a new Musical Production Academy to serve the community of Los Angeles’ Eastside. 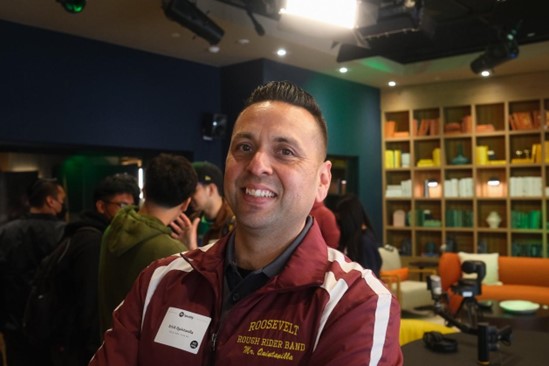 Shiny, New, and All His Own

“As a little boy, I had watched the L.A. high school band marching in the local parade, and I remember the instruments having that shininess to them- that brilliance- and I thought, ‘Wow, that’s so cool. It’d be awesome to be a part of that,’” said Quintanilla.

When he reached middle school, the opportunity to step into that world was given to him when he was presented with a shiny saxophone by his music teacher. “At the time, my inspiration was that it was my own thing, something I was doing on my own as a kid,” said Quintanilla. Independence is indeed a universal rite of passage into maturity, and with music, that joy can be found in learning and playing an instrument all on your own or multiple instruments, in Quintanilla’s case.

No Limits for an Artist

That independence and inspiration quickly grew as Quintanilla taught himself to play numerous instruments, including the tuba. “In college, when I had to take the courses to be a band director, I tested out of it because I said, ‘I can play that, that, and that.’”

“A lot of that is intuitive to me. Once I see how an instrument functions, I can kind of figure the rest of it out,” Quintanilla added.

Mr. Erick Quintanilla with his students

Hang Out with the Greats (And You’ll Be Great, Too!)

The natural ability to learn something new and excel is just one component of becoming influential in your craft. The other part is surrounding yourself with like-minded individuals. Only then can you really start to use your abilities to make a difference?

And though music for Quintanilla was very much his own thing in his youth, it was wisdom from his father that paved the way for him to utilize his talents for the better. “My dad had said find whoever is great at whatever it is that you’re doing. If that guy is great at removing nuts and bolts, hang out with that guy, so it became intuitive; ‘I’m going to hang out with him because he’s at the top.’”

The first mentor for Quintanilla was a teacher. He explained, “I attended Alexander Hamilton High School Academy of Music, and Greg Robinson was one of my teachers and very influential.” Influential and impressive. Beyond being the director at Hamilton, Robinson is the Director of the Wind Ensemble at California State University Dominguez Hills. Previously he was Music Director of the All-City Honors Marching Band and a coach to the Pasadena Tournament of Roses Band. He is a Master Sergeant in the Air National Guard, where he is Associate Conductor of the Air National Guard Band of the Southwest.

Robinson was more than just influential in Quintanilla’s music career. He shared, “It was because of him that I joined the Air Force. And then in 2008, I decided to go back to college to finish and go back to this career of teaching, which is something that I always wanted to do.”

Then there was Tony White, a professional jazz musician, musical director, teacher, and philanthropist. With a long list of music accomplishments, from establishing the first music program at his high school alma mater to becoming Director of LAUSD All-City Marching Band, Quintanilla knew this was the guy he needed to hang out with.

“I called Tony White, and I said, ‘Hey, this is the path I’m heading. Can I work with you?’ Because I’m like, if anybody knows his stuff, it’s going to be him,” explained Quintanilla. “And that’s really what led me on this track here to where I’m at now was that he’s been a great mentor. Mentors don’t just happen. You’ve got to find your mentor. You have to find the people in your life that you say, ‘That person there is doing great; I want to go hang out with that person.’” 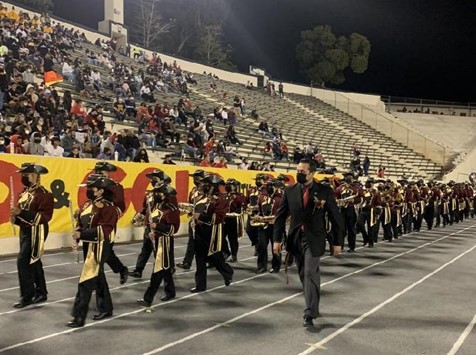 Erick Quintanilla – From Mentee to Mentor to Music Game-Changer

Before long, Quintanilla established himself as that person who is doing great. That person whom other musicians want to hang out with.

It began when he took his musical talents and leadership skills to Hollenbeck Middle School on Los Angeles’ Upper East Side, where he taught for seven years. “When I started there, there wasn’t a strong music program. There was no band, and the instruments were in disrepair. It was neglected and didn’t have somebody to hold it together. They had gone through several teachers over the years, so it just needed some TLC,” explained Quintanilla.

He was the one to bring that TLC by securing grants to purchase shiny, new instruments. “That was a big turning point in the program. I always thought if I could model our program like any of the other strong music programs, then to me, that’s equity. If we could go to a festival and compete, or exceed the expectations of the people there, then that’s equitable. I’m providing equity for the students,” explained Quintanilla.

Just like the day Quintanilla had received his shiny, new saxophone when his students were given the tools to be successful, they were also allowed to shine. “If I can upgrade the equipment, then we can go and prove if you work hard, you can do anything. Getting instruments for them allowed us to grow and develop a really comprehensive program,” explained Quintanilla.

His efforts didn’t go unnoticed, and in 2016, Quintanilla received Rookie Teacher of the Year for LAUSD. “I think that people always believed in me there. They were always really supportive, but once that happened, it was like, ‘Whoa, this guy is like … he’s doing something totally different.’ And then there was more attention on what we were doing in terms of the music program, which was where I wanted it directed,” Quintanilla humbly stated. 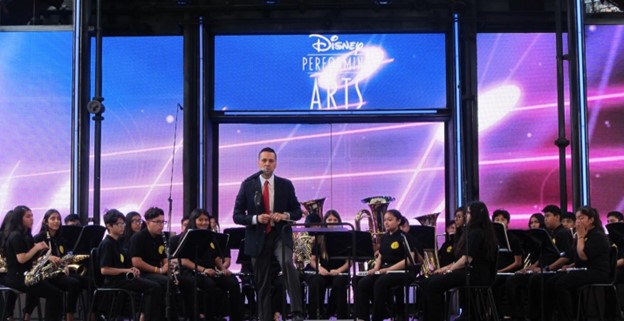 A New Kind of Shiny Instrument

To Quintanilla, music had become about relationships, creating welcoming environments, and allowing for mentorships to form. However, when the COVID-19 pandemic closed schools and halted music programs, that shininess that Quintanilla fell in love with almost lost its luster, but instead of letting it tarnish, Quintanilla discovered a newer, shinier instrument.

“I’m old school,” admitted Quintanilla. “Before the pandemic, I was skeptical of technology in music because there was a fear of electronic music supplementing or completely eliminating musicianship- the human component of it.”

But Quintanilla knows that relationships with talented people lead to great things, so when Lawrence Grey from the Young Producers Group introduced him to Soundtrap, Quintanilla decided to run with it. “With Soundtrap, we were able to teach the kids theory and musicianship while they were at home, and they started to turn in these cool projects. That’s how that relationship was really built, where the old school really had to merge with the new school, and I don’t think we can pull it apart anymore. Right now, it’s intertwined, and I think it’s good.”

Quintanilla gives his blessing to this new relationship between traditional music and modern technology and is spreading the love around in his new role at Roosevelt High School, which sits across the street from Hollenbeck.

“We have a full digital production line now, and we’re actually teaching digital production. We’re using it in several ways, such as students asking their English and History teachers to supplement one written assignment with a podcast,” shared Quintanilla.

“The other one involves teaching them how to incorporate music theory into the digital realm and use the keyboard functions. We can either teach kids theory like they would learn in college from the ground up. And then there are the musician students who can use it that same way, and we can supplement their learning. The kids need to learn scales, so we can teach them how to structure a scale. Then they can do it there in Soundtrap and get instant results.”

The most rewarding part of teaching occurs when students utilize taught skills beyond the classroom, and Quintanilla first saw this with his middle school students and now with his high school ones. For example, he shared, “In my second period, there is a young man that sits right in front who is always working on things. He actually figured out how to sample things out from YouTube or recordings, and he cuts the samples up, and he does this stuff all on his own. There are quite a few students that will do that now, using it just for fun at home, using Soundtrap to entertain themselves or be creative musically.”

The beat spreads to other teachers, who are also gaining ideas about how to use Soundtrap. “We’re not the music department that is doing their thing. We’re providing almost a service at this point where we support teachers who ask if we can come in and teach a class how to use Soundtrap for podcasts,” said Quintanilla.

“I think the pandemic took a huge toll on our mental health, and programs like this at Roosevelt with the strong music teachers help uplift and bring that part of humanity back. I think now we need it more than ever,” said Quintanilla.

With the way, music supports our mental health, and now the way technology is engrained in our daily existence, the union of the two is somewhat finite and absolute. And this power, that is, music and technology, allowed Quintanilla to think on an even grander scale.

“We’re in the process of developing a music academy here,” said Quintanilla. “It’s titled The Academy of Music and Digital Production. We want to be able to host a music academy-style magnet school here in the local east area. LAUSD has a great music academy called Hamilton High School, but it’s on the opposite end of the city, so it’s quite a distance or our students to attend. We’re going to start with opening up a pathway, which is a sort of a focus group of students that will be able to study music. With that, they’ll be able to learn theory and really prepare for college auditions or juries.”

This marriage. This union. This foundation of humanity has been built upon relationships and mentorships. “I’m a member of an incredible team here. I have Ireneo Yanez, who is our Mariachi strings teacher, Dr. Thomas McDonald, our choir teacher, and obviously our partner, young producer Lawrence Grey, and our teacher, Trent Durazo. It was difficult when I was across the street by myself, and I knew that I wouldn’t survive all by myself. That’s why I would come to visit the teacher here at Roosevelt and say, ‘Hey, can we do stuff together?’ We went from him and me to now two teachers at Hollenbeck and three teachers here with Young Producers as our partners.”

“That partnership, that collaboration, that’s the key to human survival,” said Quintanilla