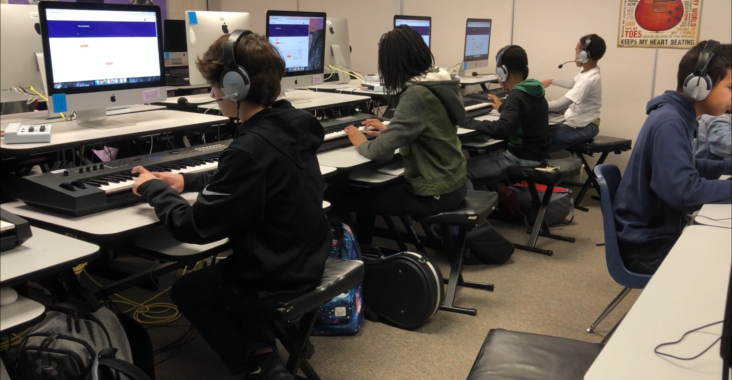 I teach music technology at McConnell Middle School in Gwinnett County, Georgia. We are one of the largest suburban school districts in the country located approximately 35 miles east of Atlanta. Working in a school system this large has its pros and cons, but one of the different pros is that our system places a high value on Arts Education and we are given some great resources for instruction. One of the unique courses that are included in our curriculum is Music Technology. My school is equipped with a music technology lab that has 32 student workstations each with an Apple desktop, 61 key MIDI synthesizer, USB audio interface, headphones and sound system that allows me to communicate one on one with individual students or to broadcast to all students from any of the workstations in the room. I discovered Soundtrap at the NAfME National Conference in Dallas, TX this past Fall. I thought that it was a great DAW, but I wasn’t really convinced that I needed it for my classes considering the software that I already had for my students to use. After giving it some thought, I approached one of my colleagues that taught in another of our middle schools across the county about collaborating on a pilot using Soundtrap with our classes. He agreed and we started our second-semester classes using Soundtrap as our primary DAW.

I design my instruction based on our local and state music standards. My lessons are framed around the five elements of music: rhythm, melody, harmony, form, and expression. The primary focus of my classes is creation. I want my students to create as much music as they can in the time that I have with them. In order to get them creating, I have to teach them the basics of using the DAW. One of the first things that I noticed with Soundtrap was how quickly my students were able to grasp the basics of the interface and create their first project. All of the tools are right there in front of them and very intuitive to use. There are very few drop-down menus to search through which makes a huge difference for the beginning level students.

All of the creation tools are literally right in the middle of the workspace. The question that I found I was constantly having to answer with other DAWs I had used was, “Where do I find (fill in the blank) again?” With Soundtrap I rarely had to answer that question.

The effects interface was another function that really impressed me. It was not unusual with other DAWs that I have used to have issues with students assigning effects to tracks. Soundtrap makes it really simple. They just position their cursor on the region that they want to add an effect and the edit button appears. Click edit and there is the menu to choose from.

Another feature of Soundtrap that I found to be incredibly easy to use is vocal recording. With a beginner level course, it can be really easy for students to get lost in the technical aspects of input and output controls when recording with a microphone. In Soundtrap, all the students have to do is plug in the mic and check the sound settings. Soundtrap sets up the gain and noise gate for them and they are ready to record. I spend a lot less time teaching them how to use the tool and a lot more time teaching them how to create.

The interface, ease-of-use, and creation with Soundtrap are great, but I can’t say that I was totally convinced that I really needed this for my classroom. That was until I began taking advantage of Soundtrap as a cloud-based application. This was truly a game changer! As I mentioned at the start of this article. My music tech lab is well equipped with hardware and software, but one of the biggest limitations my students had was their ability to continue creating once the class was over and they left the lab. My students would always groan at the end of our first classes together because they had to stop their work at their workstations until they came back to class the next day or after the weekend, but Soundtrap goes with them! Once I shared with them how they could access Soundtrap from home or download the app on their phones or tablets they were really transformed. Students could now share with their friends and parents what they were creating in class (and outside of class)! It was amazing to see students coming to class with their phones to show me what they had been working on at home.

In addition to the cloud-based app removing the physical limitations of our lab, the collaboration tool in Soundtrap opened up entirely new options for students to collaborate in class. Before Soundtrap, collaboration in my classroom meant groups of students huddled around a single workstation passing around the headphones to listen to what they were working on. With Soundtrap students were now able to collaborate with any number of other students across the room. Students were able to edit their projects and sync with each other in real time without having to take turns with a single DAW.

The success of our in-class collaboration lead my colleague (from the other side of the county) and I to try a collaborative project together. We put our class schedules together to find times that our classes were happening at the same time. I then assigned each of my students to one of his students at his school. They were given the assignment of creating a song using an AABA form with four tracks. One of the students would create the drum and bass track for the A section and the guitar and keyboard track for the B section and vice versa. They would use the collaboration tool to critique, suggest and reach consensus on their final product.

This is where I ran into a performance issue with Soundtrap for the first time. After doing a number of projects with my own 150+ students, my Soundtrap projects page had well over 500+ projects that students had shared with me. As we started the cross-county collaboration project, performance issues began to show up. The collaboration either worked great across the network or performance slowed down to the point that projects weren’t loading or syncing properly. But Soundtrap blew me away again! When I sent the issue to support@soundtrap.com and to their Educational Consultant Extraordinaire Meredith Allen, they were incredibly supportive. They promptly replied to my email and after I provided them with some more information and details they promised to follow up. Within a very reasonable amount of time, they came back with a fix. I do not have the technical expertise to tell you what they did, but I can tell you that performance is no longer an issue. Soundtrap may have been conceived as a personal DAW for individuals to use in creating and sharing music, but it can certainly be used for large-scale educational purposes as well.

There is so much more to share, but I will save that for perhaps another post. What I have realized through this experience is not only do I need Soundtrap, but my students need Soundtrap. Am I convinced of this? Yes!