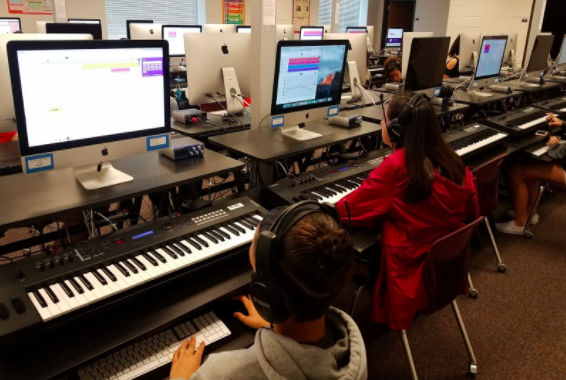 So, I’m in a great position in my county in Georgia.  I am situated in one of the largest school districts in Georgia just outside of Atlanta.  Our population is extremely diverse and our students come from many socio-economic and ethnic backgrounds.  Several years ago, our school district leaders had a vision of the importance of the growing world of technology in the art of music-making and creating.  Therefore, I have the privilege to teach a course in Music Technology full-time! I have 33 Mac stations with audio interfaces and Yamaha MX61 synths/MIDI controllers.  Coming from a band director background with an ever-growing itch to teach music creation, my current position is a dream! But enough about me–back to the blog!

Up to this point,  I was teaching creative music production techniques with a well-known entry-level DAW strictly made for Apple products.  It is a great DAW for individuals to use, but seems to fall short in the area of collaboration. In our school district, collaborative learning is one of the teaching strategies that is highly valued and basically mandated.  I dreaded collaborative work because it always meant cramming kids around one computer, mainly in groups of two to three students maximum, and sometimes taking turns sharing headphones to hear what was going on. Due to this limitation, distractions and the inability for each student to equally contribute were constant struggles in class.

My good friend and colleague from the other side of the county and I decided to look at other options and ways to work with DAWs that would give our students a less restrictive environment to create and collaborate.  That’s where Soundtrap came into the picture.

The good folks at Soundtrap agreed to let us pilot an educational account that would be shared by my colleague and I.  We were using this opportunity to see how viable the Soundtrap platform would be for what we currently teach and just how it would work for not only in class collaboration, but inter-school collaboration across the county!

After setting up our Soundtrap classes, my colleague and I got our class schedules together and made plans to have certain classes collaborate on the same project over a period of a few days.  The project was centered around creating an AABA song form out of loops. Each student in my class was to be paired with a student in his class.

The day had finally arrived!  I even had my administrator pop in to see it all go down.  Well, what happened next was an opportunity to, as our friend John Mlynczak said, “Embrace the chaos!”  Students began to sign in to Soundtrap and it seemed to take a long time to actually connect after actually inviting the student partners.  Frustration began to take over when we had already lost 35 minutes out of our 45-minute class just connecting with one another.

After consulting with the folks at Soundtrap about our dilemma, they got to work.  I don’t know what they did, but it seemed to work much better in the subsequent attempts.  Students connected and collaborated. It was then when we noticed the power of what was happening.  We were meeting kids where they were and using a powerful creative tool for them to express their ideas and knowledge to one another.

Although, Soundtrap has the option of video chat, my colleague and I elected to only allow texting through the collaboration tab.  Texting is obviously one of the primary means of communication of our current generation. Therefore, extending this option to a collaborative creative project truly meets the students where they live.  Below is a snapshot of one of those sessions in one of our inter-school collaborations:

As you can see, neither student is concerned about grammar!  They communicate as anyone would who texts. However, they are communicating ideas and discussing creative options to help their project stand out from others in the class.

Honestly, my colleague and I had varying levels of success with the collaboration between schools.  All the students liked the idea of working together with students they didn’t know. Students stated that they felt more “professional” and “knowledgeable” when they were able to discuss creative options with unknown students.  We did have the occasional, “Can I have your Snapchat?” communication that tends to arise with young folks communicating in a perceived online anonymity that really doesn’t exist. Overall, I’d have to say that the inter-school collaboration was a success, even at our rudimentary levels of achievement.

As it turned out, the most difficult obstacle to our inter-school collaboration had nothing to do with the Soundtrap platform.  It was our school schedules that were to blame. Class periods and times are under the local school scheduling umbrella. Each school in the district has the autonomy to set up the schedule that is best for them.  Although we tried to work in as much time as possible, the school schedules kept the contact time to less than 30 minutes for most collaboration sessions. Sometimes each school followed a different schedule than “normal” and basically canceled out our collaborative session for that week.  We had to show a good bit of flexibility in our instructional calendars to achieve success.

As far as in-class collaboration, Soundtrap really shines!  No longer were my students huddled around one machine to get their group work completed.  All students were comfortable and able to contribute equally to the projects. Using the collaboration tab, students were able to express their wishes and actions to the other group members effectively and SILENTLY!  Occasionally, I’d have to get a student for “spamming” the text feed, but that was rare. When I spied on the text feed of students you could really tell what they understood and what they did not understand. I could easily respond to a text and reinforce instruction to that particular group without interrupting the entire class.  I even caught some students in their collaboration tabs trying to work out times to work on the project over a weekend on their own devices! That could never happen in my previous classroom environment!

In conclusion, if you are in a classroom and want your students to collaborate on a podcast, an audio production project, a music composition project, or some any other project where audio editing is required and useful, you can’t go wrong with Soundtrap for Education.  It will meet your students where they live and give you and your students a much more enjoyable, comfortable, and less restrictive collaborative environment.

About the Author: Guest post by David Dover. David is the Music Technology Instructor at North Gwinnett Middle School in Sugar Hill, GA.  He is a veteran music educator in instrumental music and music technology for 20+ years, a music technology standards revisionist for the state of Georgia and Gwinnett County, and a contributor to the music technology resource and advocacy site mutechteachernet.com.